As you may know if you’ve been following for my blog for a while, last year I spent a few months being vegetarian and whilst in the end I realised I couldn’t commit to the veggie lifestyle fully (at least not yet anyway), I’m really trying to make more of an effort to eat less meat and have more vegetarian days. At the moment, my goal is to have at least three meat free days a week, which is manageable and easy to achieve for me. Baby steps hey? Not only do I want to eat less meat with the intent of living a more compassionate lifestyle, but it’s also a massive deal for the environment for us to be consuming less meat, both these reasons combined, and with the vegetarian / vegan lifestyle becoming more and more popular, more restaurants and food chains are introducing more and more vegan and vegetarian options to their menus.

Last week, my best friend Emily and I decided to visit Frankie and Benny’s, a restaurant which I have loved my whole life. It’s always been one of my favourites, ever since I was a child. Normally when dining at F&B’s, I opt for a cheeseburger and a milkshake (delicious), but this time I wanted to go full vegan, at least with the food, because I got a coke to drink and I don’t know if that’s vegan or not… full time vegans, fill me in please!?

Here’s a look at what I ate 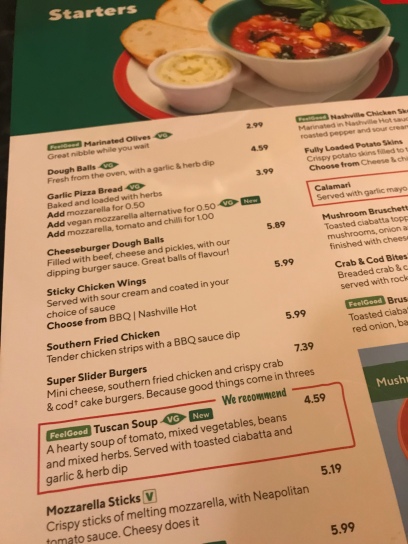 On F&B’s starter menu, they have a nice selection of Vegan options, I was seriously tempted by the delicious sounding Tuscan Soup, which I think I’ll have to get next time, but in the end I opted for the Garlic Pizza Bread with a vegan mozzarella alternative as a topping. The mozzarella alternative was very creamy and more like a liquid on top of the bread, it was alright, but not the best, and I probably wouldn’t bother with it again. I think if I were to have the garlic pizza bread again, I’d have it alone and without the ‘cheese’, purely because of the texture. It was okay though and I wouldn’t be completely opposed to having it again, for me, it was a take it or leave it kinda thing and overall, I think I’d rate the starter a 6/10. 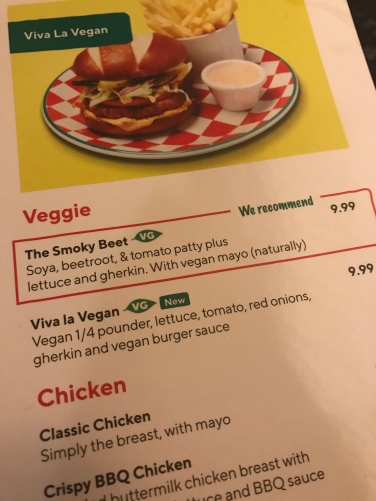 For my main, I really wanted to try the Viva La Vegan burger which hello, sounds SO exciting! The burger is a vegan 1/4 pounder which comes with lettuce, tomato, gherkin (ew, I’d ask for it without) and vegan burger sauce, which would be interesting to try as I never usually have the burger sauce, in any form. Unfortunately, F&B’s didn’t have either of their vegan burger options available when I visited (just an excuse to go back) so instead I decided to go for the Mac No Cheese dish, another dish which to be fair, I had been wanting to try since I saw it on the menu a couple of weeks ago. Mac N Cheese is one of my favourite dishes of all time (especially with a lil’ tomato and garlic sauce mixed in), so I was excited to try this vegan option. The Mac No Cheese is a pasta dish (obviously) with a creamy cauliflower sauce, butternut squash, herb crumbs and rocket. This was really nice, but for someone like me who is an incredibly fussy eater (I’d never had cauliflower sauce before this and only once before had I tried butternut squash), I think it will take some getting used to. The dish tastes really healthy, probably because of the veg, and I would get again. It wouldn’t be my immediate go to, but I think it’s a grower and if I were to go full time vegan, this would be a great option for me when visiting Frankie and Benny’s. Overall, I’d rate the Mac No Cheese a 7.5/10. 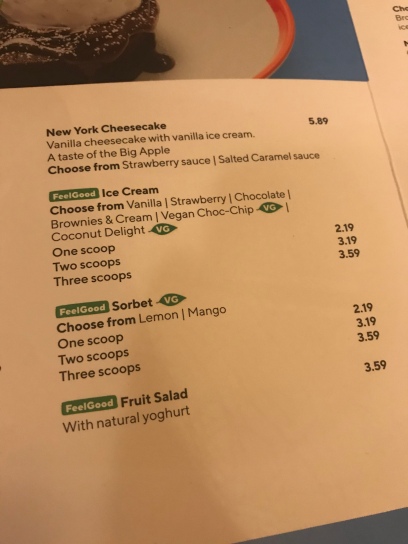 Ah dessert, the most exciting and best part of the meal in my opinion. Both Emily and I opted for a vegan dessert option and we both had the Vegan Chocolate Chip Ice Cream, which was really exciting. I’ve never had vegan ice cream before, but I’ve wanted to try it for so long. If I’m honest, it really didn’t taste a lot different to normal ice cream. If anything, the chocolate chips stood out a little more as they tasted slightly stronger than a normal dairy choc chip would, but that’s the only difference I really noticed in taste. The whole dish itself was actually really yummy and I’m even craving it a little now. Emily really enjoyed the dessert too, so overall I think Frankie & Benny’s have done a good job with their vegan dessert. On the menu they also have sorbet and coconut delight ice cream, both suitable for vegans. I’d rate the Vegan Chocolate Chip ice cream a strong 8.5/10 and I will definitely be having this again! When vegan ice cream tastes that good, who needs dairy!?

Overall from what I experienced, I’d rate Frankie and Benny’s vegan menu a 7.5/10 however I really would love to go back and try some of the other VG options, especially the Tuscan Soup and the burger… although I’d love to get the chocolate chip ice cream again, to judge properly I think I’d have to give the coconut ice cream a whirl. The sorbet would be nice for Summer, but I already know I like sorbet so there’d be no need for me to ‘try’ it as such, however I know it’s there for me as a great option in the future.

Which restaurants vegan menus do you love? Are you a vegan? Have you tried Frankie and Benny’s vegan menu yet? Let me know in the comments below.

Thank you all for reading,

Hello everyone my name is JENNIE! Follow me on my journey of happiness and love ❤️❤️ View all posts by 50shad3s0fjay